Brave It All Alone

Film and Television Critique With Absolutely No Accreditation

Patriot is a confounding piece of television, in that I love it to pieces but when recommending it to people I find myself staring off into space trying to explain why. It’s easy to use certain adjective trains like surrealistic black comedy spy drama or describe it as comparable to the dry humor of the Coen brothers because while it is those things it’s also a tender and unique kind of weird that makes you lean in a little bit. It will juxtapose a pitch perfect awkward exchange of dialogue with a pratfall without missing a beat and then tap-dance deftly into what is essentially a spy drama. It’s The Bourne Identity mixed with Fargo crossed with a little bit of In Bruges and the main character John Tavner, portrayed with an eerie wounded intelligence by Michael Dorman, also happens to be an accomplished folk singer/songwriter with a bad habit of writing songs that literally recount his spycraft exploits. Oh, and it’s also beautiful. A lot of shows and films will suck the color and hue out of the frame to make things seem more dramatic or serious but what they fail to do to keep the viewer from getting lost in the greys and blues is compose a shot, and Patriot I could rewatch on mute.

The cast has more than a few hey I know that guy from something actors. Kurtwood Smith plays basically Red Foreman but with the advantage of some actual depth. Terry O’Quinn is a shady but mostly reliable paterfamilias. And Gil Bellows, who is also an Executive Producer, pops up in a minor role here and there. But the show belongs to Dorman who has the difficult task of portraying a kind of sensitive soul struggling with the loneliness and confusing nature of his job as a N.O.C. for the C.I.A. while also being sort of an asshole. He doesn’t have a lot of dialogue to work with and is forced to express what can be perceived as a kind of nihilistic resignation to the job by smoking a lot of pot and generally not giving a shit about day to day politeness or friendly interactions. He seems to be, outside of a long distance and sad relationship with a woman, purely about function separate from form except for the occasional open-mike night and it’s difficult to pin down or care for a character who never smiles and may or may not be a sociopath. But there is something familiar in John Tavner, something relatable in his melancholia and in the amusing and well-realized premise that even the job of an international undercover spy can be as tedious and absurd as any other. 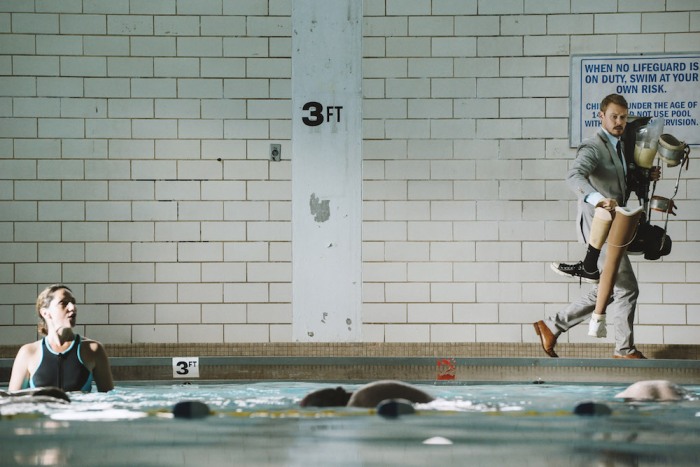 “Let me walk you through our Donnely nut-spacing and cracked system rim-riding grip configuration: using a field of half-seized sprats and brass-fitter nickel slits, our bracketed caps and spray-flexed brace columns vent dampers to dampening hatch depths of ½ meter from the damper crown to the spurv plinth. How? Well, we bolster 12 Husk Nuts to each girdle jerry while flex tandems press a task apparatus of ten vertically composited patch hamplers then pin flam-fastened pan traps at both maiden apexes of the jimjoints.”

Did I mention the prominent role industrial piping and welding plays in the story? It’s hard to keep track of how many different ways Patriot calmly steps off the path and wanders into some unexpected shenanigans that elaborately circle back to the main plot. Take, for example, the image above which is, in fact, the main character absconding with a half dozen or so prosthetic legs from what appears to be a water aerobics class. At face value this doesn’t make any sense at all but fifteen minutes later the scenes meaning is perfectly clear. And funny. And a little bit sad. Granted, not all tangents are related to the main plot, some are merely backstory, but there’s a delightfully disjointed narrative akin to Pulp Fiction or Go where the same event or interaction takes place just outside the view of another pivotal moment which increases in complexity deeper into the season.

Again, it would be easy to dislike John Tavner for many reasons but adding that musical element is what elevates a very good show into something different. There are few instances throughout but one in particular where I sincerely wish this character or actor or whomever would actually put together an album that stays on message instead of careening off into stream-of-consciousness for humorous/narrative purposes. His style is some marriage between Matt Berninger from The National and Samuel Beam of Iron & Wine and it’s one of the few times where I wish there were more musical interludes in a show where I am thoroughly addicted to the twists and turns of the story. And again, I’m struck by how difficult it is to explain what Patriot is like with each part, the music element, the occasionally non-linear narrative, the dark humor, seemingly incongruous unless viewed as a whole but once that whole is put together there’s a joy to the material that makes you want to grab the nearest person and shout “You need to see this”. The last time I felt this enthusiastic about a new show was probably Stranger Things and while I’m not saying that I predicted its meteoric popularity or cultural impact….

…. but from what I can tell so far no one appears to be watching. And I get that. When this appeared on Amazon Prime my brain formed the letters “MEH” in the sky above my computer and I went about my day. But then I found a review from a writer I happen to have a great affection for even though he goes on about The Good Wife far too enthusiastically and this writer that I like absolutely raved about Patriot, jumped up and down, literarily speaking, and insisted on at least checking out the pilot episode. Once I gave in and check it out I stopped. The next day I watched another episode. And so forth. Patriot is so good that I had to use all the self-control I could muster to not binge watch the thing and I still want to go back and rewatch some episodes.

Dennis (distraught): “I had an erection. Not from being in a room with a sex worker. I think mostly I was excited about helping you gather information and one thing led to another…and I didn’t even get any information. About where the girl in the passport is. I just got herpes.”

Tom: “[To Dennis] Put down the phone, Dennis. You can tell your wife you slept with a prostitute. I’m okay with that, go for it. But you cannot tell her about this situation you were drawn into. [To John] Why…why was he drawn into this anyway?”

John (without emotion): “I needed his pee.”

COME ON. I don’t even know what else I need to say but the show is lousy with these kinds of exchanges and I present the same challenge as the other writer, in fact, I’ll double down. If you can make it through the cold open and the opening credits without Patriot sparking some well-deserved interest, I’ll eat this review. At the very least enjoy the haunting and beautiful title song: